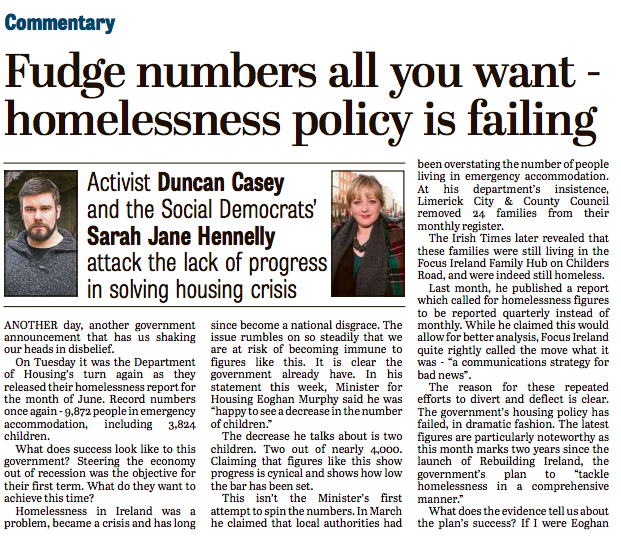 Another day, another government announcement that has us shaking our heads in disbelief. On Tuesday it was the Department of Housing’s turn again as they released their homelessness report for the month of June. Another new record to be ashamed of—9,872 people in emergency accommodation, including 3,824 children.

This started as a problem, became a crisis and has long since become a national scandal. The issue rumbles on so steadily that we are at risk of becoming immune to figures like this. It is clear the government already have. In his statement this week, Minister for Housing Eoghan Murphy said he was “happy to see a decrease in the number of children.”

The decreases he talks about is two children. Two out of nearly 4,000. That he feels entitled to try and spin such awful figures in a positive way speaks volumes about how low he and his colleagues in Fine Gael have set the bar for themselves.

This isn’t the Minister’s first attempt to spin the numbers. In March he claimed that local authorities had been overstating the number of people living in emergency accommodation. At his department’s insistence, Limerick City & County Council removed 24 families from their monthly register. The Irish Times later revealed that these families were still living in the Focus Ireland Family Hub on Childers Road, and were indeed still homeless.

Last month, he published a report which called for homelessness figures to be reported quarterly instead of monthly. While he claimed this would allow for better analysis, Focus Ireland quite rightly called the move what it was—“a communications strategy for bad news”.

The reason for these repeated efforts to divert and deflect is clear. The government’s housing policy has failed, in dramatic fashion. The latest figures are particularly noteworthy as this month marks two years since the launch of Rebuilding Ireland, the government’s plan to “tackle homelessness in a comprehensive manner.”

What does the evidence tell us about the plan’s success? If I were Eoghan Murphy, I would be trying to spin the numbers as well, frantically. Total homelessness has increased by 50%. The number of children is up 75%.

Arguably the most shocking statistic is here in the Mid West. The number of homeless families in Limerick and Clare has increased by 750%, from 11 to 88. This number continues to rise and the vast majority of these families are in the Limerick City (area? constituency?). Emergency service providers are at the end of their tether as they try to accommodate an every increasing number of people who find themselves in such a traumatic situation.

What can the government do differently? The dogs in the street know that the obvious solution is to build more housing units. This is not happening at the pace required. What else can be done?

The issue of vacant homes is particularly relevant to Limerick. Anyone that spends time in the city is familiar with the large number of vacant and neglected buildings in and around our Georgian Quarter. These are not just an eyesore, they are a barrier to solving the housing problem. It is unacceptable that landlords allow their properties to sit there and decay while a housing crisis unfolds.

The government needs to introduce a vacant housing levy for vacant dwellings. The duration should be set by each local authority. In Census 2016 there were over 8,000 vacant units in Limerick. Even if this has decreased, we know there are several thousand empty homes across the city and county. A massive resource that could help combat the issue.

Introducing the levy would not just benefit people that are at risk of homelessness. Rents in Limerick have risen by 17% in the past year, far higher than the national average. This follows a 12% increase the year before. This trend is unsustainable for tenants. Dozens or hundreds of vacant homes appearing on the market would stabilise the cost of rent.

Of course, a 17% increase in rent would not happen in a properly regulated rental market. Eye watering increases like this are what drive families into homelessness. Current measures to provide rent certainty are totally ineffective. Limerick is not considered a rent pressure zone, meaning landlords are free to increase rents by 17% or more.

Rent caps should apply to the entire country and be set at the rate of inflation. Again, this would stabilise the rental market not just in Limerick but nationwide, and soften the burden on people who are struggling to stay in their rental homes.

Earlier this year we learned that the Gardens International site on Henry Street will be fully let, bringing an anticipated 750 jobs to the city. While this news is welcomed by everyone, little thought has been given to where these people will live, or the effect such an influx could have on the rental market.

A 17% increase in rents could become 25 or 30% given how poorly supplied the market is, thrusting more families into the arms of emergency service providers and out of comfort and security.

In addition to these measures, there is a clear need for the establishment of a single agency with responsibility for delivering housing. Currently, there are too many bodies to point fingers at and blame for the lack of progress. An agency which takes an accountable, hands on approach by project managing the provision of new homes deliver far more quickly and effectively than the current system ever will.

Rebuilding Ireland has failed. The Government has failed. It is time for Minister Murphy and his party colleagues to take a step back and accept that a radical change is needed in their approach. Thousands of Irish children are already growing up without somewhere to call home. There will be thousands more in another two years, if policy does not change. The power to solve this problem is there, in the government’s hands. They need to show some desire to use it.

This is a text widget. The Text Widget allows you to add text or HTML to your sidebar. You can use a text widget to display text, links, images, HTML, or a combination of these. Edit them in the Widget section of the Customizer.